Alter of Day Of The Dead

The origins of the Day of the Dead celebration in Mexico, date back to a time close to the arrival of the Spaniards, for pre-Hispanics when a death occurred, marking the beginning of a trip to the Mictlan, name with which they referred to the kingdom of the dead or underworld, also known as Xiomoayan.

The trip according to the traditions lasted four days and when the dead man arrived at his destination, he offered gifts to the Lord of Mictlan and his companion, then they sent to one of the nine regions, where the dead man spent four years in probation, in order to reach the top floor, in this place they found the eternal rest.

Death is considered an omnipresent character in Mexico, giving over time a solemn, religious and festive sense to the cult that surrenders to the dead, for this reason it gave rise to the altar of the dead, which constitutes an element fundamental in the celebration of the Day of the Dead, celebrated from October 28 until November 2.

What is the altar of the dead?

The altar of the dead is the physical representation of the vision that a whole people has about death, it is a mixture of pre-Hispanic and Catholic traditions, it is used to pay tribute to deceased relatives and illustrious characters.

It is a construction full of much symbolism, where food, drinks, photographs, floral offerings are placed, among other elements used to honor the dead.

The altar of the dead, is generally constituted by different levels, where the immaterial and material world is represented, in each of the levels symbolic objects that define religion, culture and other aspects of the person are placed. dedicate the altar. 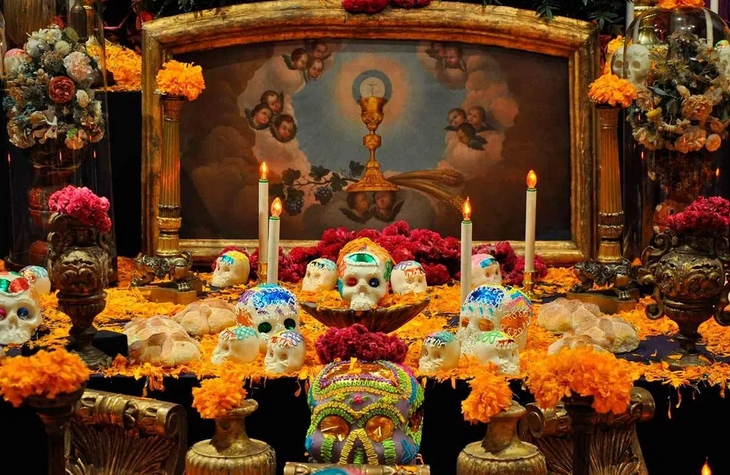 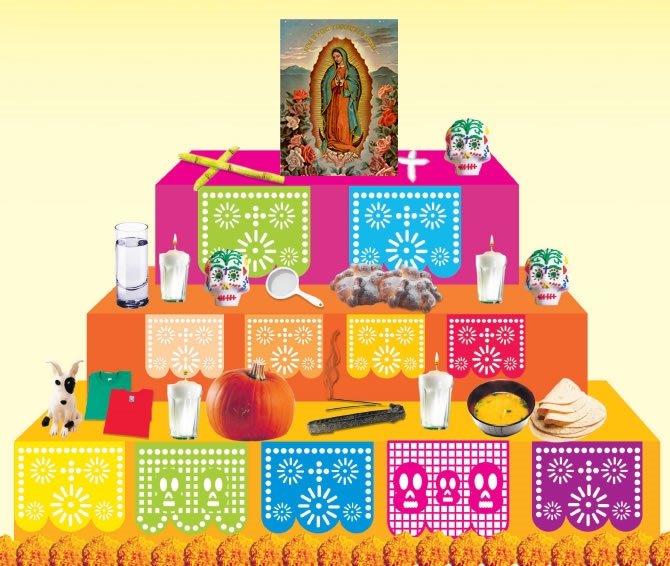 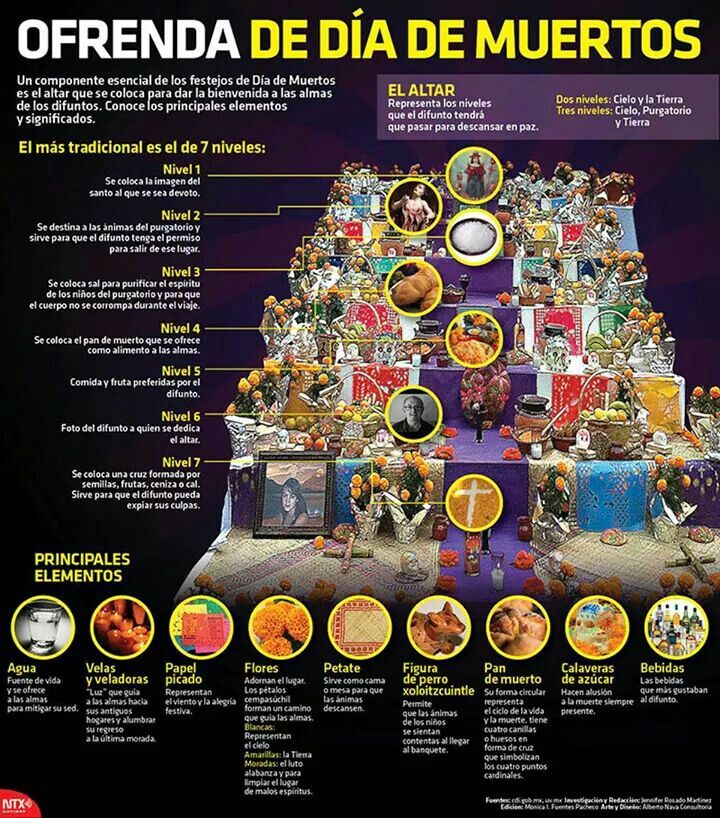 In these altars the seven levels that the soul crosses to represent spiritual peace are represented, it is generally associated with the number of destinations that exist according to the types of death, according to what is established in the Aztec culture.

Elements of the altar of the dead and meaning
Aromas. In the altars different aromatic elements are placed and some herbs with smell, they are a symbol of the purification of the soul and the fruits that are obtained from the earth, according to the traditions these aromas attract the deceased to find their offerings.

The herbs of smell that are frequently used on the altar are rosemary, thyme, bay leaf, marjoram and chamomile, they are boiled in a pot covered with a prickly pear cactus, the smell resulting from the mixture of these Herbs will be so attractive that it will guide the souls of the deceased to the earth.

Incense and copal resin are also frequently used because they produce a distinctive aroma.
Arc. This element is located on the last floor of the altar, it is an arch full of palm, reed or iron, they together with the arch symbolize the gateway to the world of the dead, that is, the eighth level to reach At Mictlan, this arch is decorated with cempasuchil flowers and sometimes candies and fruits are placed.

Papel Picado. Generally the chopped papers are of purple and yellow colors, these same colors are used in the paper chains, since for the Aztec culture these colors represent the duel and the purity, however the paper that is commercialized has multiple colors and have designs de Catrina and the Mexican cartoonist José Guadalupe Posada.

Candles These are placed on the altar as a representation of fire, in addition both candles, candles and candles are related to the Catholic religion; They represent a guide for the soul and mark the way for the dead.
Water

As a representation of the land, some spices, seeds and fruits are included on the altar, cocoa and corn seeds are generally placed in order to create patterns on the floor, currently the colored sawdust is used more frequently.
flowers

Cempasuchil flowers, turkey mucus, amaranth and cloud are frequently used, the altar is adorned with them, and they are used to welcome the deceased; On some altars they also use the flowers of tulips and birds of paradise.
Skulls They are made with chocolate, amaranth and sugar, they refer to death, indicating that it is sweet and not bitter as everyone thinks, these skulls add a lot of color, rich flavor and smell.
Food It is customary to prepare meals that were liked by the deceased in life, however dishes such as mole, tacos, pozole, tamales, among others are placed; but you also have to include traditional Mexican fruits, such as tejocote, orange, squash and corn-made foods. The typical dead bread is also placed, this consists of a sweet bread that is placed on the altar as an offering to the dead.

Drinks Alcoholic beverages are usually placed on some altars, especially if they were to the taste of the deceased, such as tequila, pulque and rompope, the drinks are served in clay containers; In case the deceased did not like alcoholic beverages in life, any other beverage can be included.
Objects for personal use

Often clothing items are placed on the altars that allude to the profession to which the deceased was engaged, his favorite objects and other preferred clothing in life, if the deceased is a boy or girl toys are placed, some place the Favorite music of the deceased on the altar.
Ornaments Some figures are used as pictures with images of burials, wakes, skeletons, figures of alfeñique, plaster, mud or wood are also placed, which allude to death, in addition to these elements, fruit and floral ornaments are added; There are many existing ornaments of Mexican art that are placed on these altars.

On some altars chains with yellow and purple crepe paper are also placed as ornaments, purple represents death and yellow life.